Hopefully as I do this monthly review of the news items I saved on my Google Reader feed, I can evolve it into something halfway entertaining. Let me try this again this time with pictures and links. Of course you can always skim through my news items on my Reader feed in the sidebar.
Internet worms are back and they are worse than ever. Reports came out last week of two really nice bugs that came from emails disguised as e-cards and the other is a destructive mp3 killing worm! That prompted me to back up all the music that's on my hard drive, but it also prompts me to remind people to keep everything up to date, especially Windows users! Windows Update is your friend! 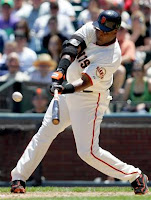 Is Barry shooting up on roids? From what I see there is yet to be any evidence that he is. Obviously the man has bulked up a lot, but I don't see any test results saying he's loaded..not yet anyways. I celebrate the man breaking Hank Aaron's home run record. I challenge any motormouth sports pundit to hit one home run. Just because Barry can make that look easy, does not mean that it is! The main reason I haven't been into sports as much as I used to be is because of the ratchet jaws in the media.

The same goes for the Vick case. I would not be surprised if he is somehow involved with dog fighting, but the last time I checked, he has to face a judge and stand trial held by a man called a prosecutor. Once that process is completed his guilt or innocence will be determined. And as horrible as dog fighting is, let's try to focus our anger on those who will hurt human beings who may be equally if not more defenseless.

J.K. Rowling is a rich lady. How did she become rich? She used her talents to construct a fantasy world that intermingles with our modern real world and by creating characters that everyone can relay with in one way or another. I am almost finished with the last book and I have to admit that I've enjoyed the experience. I'm sad to see that coming to an end.

I'm going to post soon on various customizable home pages such as iGoogle and this new one that I'm really starting to enjoy called page flakes. The great thing about the web is creating an environment that is geared specifically for me. 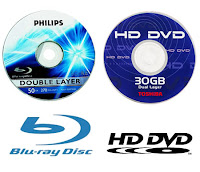 High definition disks are at a crossroad. In one corner there is the HD-DVD format which is backed by mega store Wal-Mart because of it's low cost, and in the other corner is Blu-Ray which is made by Sony and has the backing now of not only Blockbuster but Target. This is reminiscent of the old VHS/BetaMax war in the early 80's. I personally think that Sony will win this time. I'm still pulling for HD-DVD, though.

Email ThisBlogThis!Share to TwitterShare to FacebookShare to Pinterest
Labels: news