Last night was pretty brutal. Around 8:00PM thunderstorms started rolling into the area. I figured it would just be a typical scattered quick storm.
Boy was I wrong.

The power cut off a couple times, but luckily we didn't lose power. Janine called from her cell phone on the way home and said it was the most amazing display of nature that she's ever seen. She made it home after a slow drive and I met her outside with the lightning rod, I mean umbrella.

Once we got in safe, we quickly nuked dinner. I had started frying bacon, but with the power outages, I was scared to continue. So we had microwaved bacon and eggs for dinner. We then tried to watch Zodiac which started out as such a good movie until the thunderstorms came back again and the power went out. So we gave up and went to bed.

The light show continued well into the night and being the light sleeper that I am, getting a good night's sleep was just not going to happen. I also knew my morning commute was going to be a challenge when the first local story was about some nimwit who was stuck on the flooding Beulah road. I've had to walk across the road before and the water is knee deep at least. There's no way that anyone can see that level of water and just think they can drive over it. Come on people! 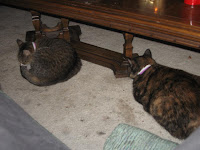 This weekend will be pretty busy, Janine and I are moving her sister, her husband, and their 2 year old in, so the blogging world will have to carry on without me. Keep checking my twitter for updates. I leave you with another picture of our cats cowering from the storm by hiding at my feet.