The Nerd Tour of Richmond

You can't put two geeks and their girlfriends together without some serious electronic shenanigans. Jessi and Sam got here around 2 o'clock (I think). We headed first towards the airport to check out Garden Ridge. It's a huge building full of things that would make most of our mother's salivate for days.

Janine and I did agree on getting a fake black Christmas tree. It's not as Gothic as it sounds, it's actually very pretty and it'll look really nice with some white lights and some crystal like ornaments.

We then traversed across 64 to Short Pump and went to the Barnes & Nobles. This was the biggest one in town and mostly the reason why we all decided to spend the day on the far west end. Jessi was looking for a book, or series of books or something.

We then headed to the Short Pump Town Center to check out the Apple store. I had never been in that particular store before so it was very interesting to see the local snobbery that is Apple fan boys. I had a good time there though. I got to play with the iPhone and the new iPod touch. I'm such a sucker for such geekyness. I wanted to play with them for hours! 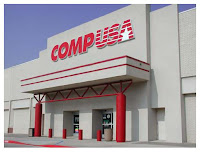 Sam was looking for a good deal on a Mac Mini but the Apple store is still selling them for a pretty high price, so we agreed that we should check out the CompUSA down the road to see if they had anything on sale. They did not...I'm sure Sam's going to check out eBay to see if someone is selling one at a decent price.

We then had to bring balance so we headed down Broad Street to Ben Franklin crafts. Janine found a coloring book and coloring pencils and Jessi got handfuls of yarn.

Boy shopping for crafts can work up an appetite! We all finished the evening by heading to Olive Garden for some fine Italian -like cuisine. Everything was delicious! I had a glass of Shiraz. Very tasty and fruity. I then chowed down on some beefar...I mean Cheese Ravioli. I don't know, it was a craving. Everything was very nice though.

Sam and Jessi hit the road around 9 and Janine and I went home, watched a little TV and passed out. Not a bad way to spend a Tuesday away from work I'd say!