My Thoughts on Mojave 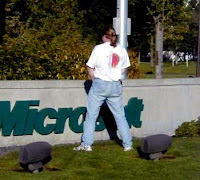 We all remember The Pepsi Challenge. Coke drinkers were challenged to test Pepsi and Coke in a blind taste test. The people that choose Pepsi were then paraded in their ads showing that their product tasted better than Coke.

Being raised in a Coke household, those ads didn't go over well. How dare people deceive regular people? Put a blindfold on anyone, my Dad would say, and they'd prefer the crap with double the sugar. Again, another topic for another time.

Zoom ahead to 2008, Microsoft is trying to get the word out that their new operating system, Vista, isn't so bad. We've all heard from the elites in geekland that have the microphones and the volumes and volumes of blog readers about how horrible the OS is. The result of that is regular users which would have no problem with Vista have avoided it altogether.

You even hear similar responses. How dare Microsoft deceive regular people into showing them that Vista is a stable platform. How dare them!

I'll agree with a lot of people that Vista still has some issues. I know someone who still to this day, has buggy issues with it, but I'm also again reminded of my 66 year old father who runs Vista like a dream and is yet to have any problems. Again, he's sixty six. Two thirds of a century old. The man has never touched a computer in his life and now he's setting up complex Excel tables for his church and hunt club....with Vista!

I get the purpose of this experiment from MS, and I applaud them for calling out the nerd hierarchy for unfairly branding a product as unusable simply because they're all power users on steroids and their stable (and I mean stable) of toys didn't work when Vista was first released a year ago. It also calls out us regular users as being sheepish for taking them at their word and not trying out the product for ourselves.