Plug of the Week 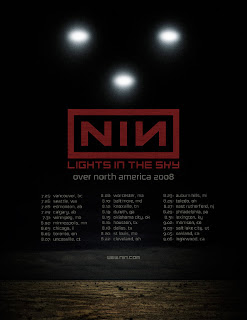 The writer's cramp is still killing me here!

I wanted to at least plug one of the most important band in our times, Nine Inch Nails. Trent Reznor has always been a pioneer not only in the style of music he brings to mainstream, but he's also a pioneer in this new computer age. He has offered his last two albums for free on his site for download. He just asks that people come out to see his shows.

Some would question where the success is in plugging a concert tour, but NIN takes things up a notch by posting rehearsal footage in lieu of their tour starting this month. The footage has created quite the buzz and I recommend people visiting the site and watching those videos for yourself. There's lots of extras there too, such as a news feed..yes a news feed! RSS! It's all right there too, I just love visiting the site to see what's new, so I figured I would plug it to all of you as well.

Go enjoy the site, go enjoy the music that they share with you for free, but most of all, if they are in your town, go see them. They put on an amazing show! Here, watch some rehearsal footage!