Talks With My Dad

I should just make it a point to highlight my conversations with my Father whenever I have them. I always find out so many new and interesting things about him.

Today he called and we discussed his service in the Navy specifically his service on The Intrepid. For those of you that do not know your war history, take a minute to read this history of this brave ship. The wikipedia page does a great job. I referenced this the nicknames to Dad and he got a big kick out of it.

SNIP: Because of her prominent role in battle, she was nicknamed "the Fighting I", while her often ill-luck earned her the nicknames "the Evil I", "the Dry I", or "the USS Decrepid".

During her service in World War Two, the Intrepid was hit several times by Kamikaze attacks, and a lot of men lost their lives, but she kept going and was very effective despite being perpetually mortally wounded, the crew went on to contribute big to the American war effort. 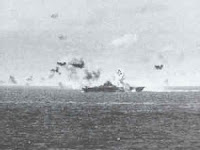 SNIP: Her combat record includes the sinking of two Japanese battleships and numerous other vessels, as well as the destruction of more than 600 enemy aircraft. Intrepid served three combat tours off Vietnam and twice as NASA Prime Recovery Ship for the manned space program.

I can't help but to swell up with pride when I hear those stories. The coolest part though is showing my now geeky old man that there's a website that has a listing of crew members and how to find them. I also promised that I would take him to see The Fighting One which is now commissioned in New York and will be a floating museum when it's finished renovation this year.

Now Pop served during peace time, he never got to see any specific action, but he was on board and stationed in Cuba before Castro's uprising and has some stories about life in old Cuba.

I can go on and on. I don't think my Dad will ever really know just how really proud I am of him.