Part two of my three part series on the web in 2008 focuses on what went wrong. What went bad this year? In these troubled times, a lot of sites have hit the skids, or some services just fell short either in customer service, brand promotion, or a combination of many other things. I'm saving the sites that hit the skids for tomorrow. Today I want to focus on sites and services that lost their steam this year.

First my honorable mentions for The Bad of 2008:

That leaves my pick for bad for 2008. This really should be listed with The Good because of their rabid success in 2008, and their now spread into infamy, but this year was so good for I Can Has Cheezburger that it wins for The Bad. Bad as in badass.

Eric Nakagawa was in the right place at the right time. He started the site as a central mainstream service to capture an underground joke shared among 4Chan groups and their lot, per say. The premise is simple enough, put a caption on a funny picture of a cat.


Now the site generates around 3 million page views per day and no one can escape having an LOLCat in their inbox, or on their shared items on their Google Reader page. The service has even spread to satire dogs and even politicians. You can even make your own LOLCat and caption it yourself. 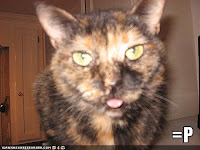 Here's one I made from Topaz.

There may be no end for the goodness at ICHC, and I don't think most people mind a bit. Especially if they make their own language around it. So I guess if we all do our best, we can all has success.
at December 27, 2008