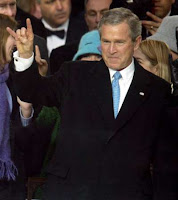 As I watched with the world the overwhelming yet smooth transition today involving the most powerful political chair on the planet, I thought about what my comments and thoughts should be about this historic day. I was reminded of the outpouring of the democratic process when millions of people voted perhaps for their first time. I thought about the people that have bled and died to deliver to all of us that ability to vote and that ability to transfer power without overthrow. But one thought stuck out more than any other.

Now, more than ever, as I mentioned after the elections, we all need to do more to participate in our government. I honestly don't know a soul that can tell me who their representatives are much less how often they interacted with these civil servants. We do not elect them to make our decisions, we elect them to represent our decisions.With a President that feels that government and expansion of the same is the cure to our nation's ills, it is imperative that we all look closely at legislation and voice our support or opposition.

So once again, here are those links to not only find out who represents you, but how to contact them. People have been saying now for months, "Yes, we can", now is the time to make that an action, not just more empty rhetoric because we can. Americans have proven that we can do anything.