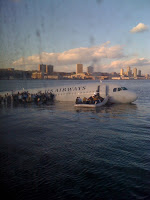 So we all saw the events yesterday with US Air Flight 1549 which crash landed in the Hudson River not long after taking off from La Guardia airport in New York City. News reports came flooding in around 3:45 and cameras were there to to show the events as they happened live.

Fifteen minutes earlier, people on Twitter were already discussing the crash and this picture was uploaded through Twitpic . It was sent up by Janis Krums who was on a ferry which ended up being used as a rescue vehicle for the passengers of that ill fated flight.

This is where something like Twitter shines. I am no fan of citizen journalism, but when something happens like this, and people are savvy enough to record and send that to a community of like minded people, world events can be spread around the globe in seconds instead of minutes. We can now see news just about anywhere as it happens, not after it happens.

We have come a long way from print and now even broadcast media. Every day the world is becoming more and more of a community. What an amazing time to be alive, not only for those fortunate passengers, but for all of us!
at January 16, 2009