Keeping my end of the bargain to travel and see something different every year for our anniversary, I figured I'd take Janine to see the history and the craziness that is Philadelphia. We got up around 6AM Friday morning and boarded the train. I had been on a couple of train rides, this was Janine's first. From what I gathered it won't be the last either. She had a lot of fun compared to flying. It looks like we're going to Maine next year she said. Maine it is! 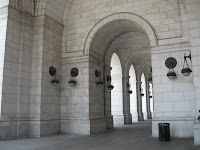 The train stations to me are always a cool thing to see. A lot of them are mini malls now, but they are historic and are known for some of the best architecture in the country, I think. I always love walking around those structures because they have crazy overheads. It all feels very....Roman.

Once in Philly we hopped on a cab for the hotel and checked in. Club Quarters is right in the middle of everything in Center City, so I figured this was a good idea. We got a nice suite on the 8th floor and I have wireless access, so all is well. The street noise is a lot louder than I thought it would be at night, but we have enough fans blowing in our room that we don't hear a thing.

One of the first mutual decisions about what to see in Philadelphia was the Mutter Museum. It is best known for it's collection of oddity's. Pictured is one of the walls there which is lined with skulls. Each skull has some description about the it's last day. Some were executions, some were suicides, but most were diseases.

The museum puts human remains in reach with displays such as the soap lady, a cross section of a man's face, fetuses that were preserved, conjoined twins, and so on. It can get a little intense, I can't recommend this for everyone, but it is educational.

I got a kick out of the display of several thousand items that have been removed from people's throats. Also they have the skeleton of a gentleman who was over 7'3" and that made me feel tiny! If you really want to see some "weird shit", I recommend this place above anything else that I've ever seen!

Today will be more of a full day of seeing the town. I look forward to seeing Constitution Hall and heading down to 9th Street tonight for steaks. I'll post pictures tomorrow morning.
at May 09, 2009