Lame Pick of the Week 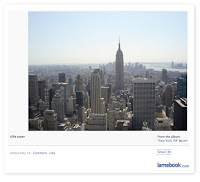 It looks like everyone's gotten the word and have moved to Facebook. Even the dim witted, poorly educated, masses that turned MySpace into a den of stupidity have made their way over.

I try not to judge and I try not to lose faith in humanity, but Lamebook is one of those sites that make it very difficult to have a positive outlook on our upright fellow citizens. Lamebook allows users to submit their friend's poor grammar, lack of good common sense, or just good old fashioned trailer park trash behavior.

The most ironic feature of all is that it's user submitted. So often times the poster is just as 'lame' as the postee. But it's one of those sites where you laugh and you feel that we're doomed all at the same time. Isn't that what the internet is all about?
at July 06, 2009