My Take on Number Four 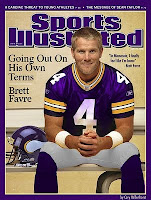 So Football season begins as summer winds down and as sure as the sun has gone up at the beginning of the day and finishes by setting at the end of the day, Brett Favre is still playing. Here's my thoughts.

As I post this, the Vikings are playing their final preseason game before the regular season begins. I cringe as always by seeing Viking purple as a Packer fan, but there's a familiar ex Packer and future hall of famer playing in a purple uniform.

Of course this happens a year after announcing his retirement after making a comeback with the Jets after announcing his retirement from the Packers. When he retired two years ago I knew he had another three or even five years left in him. Favre has a crazy work ethic and I don't think he can walk away from the game, he'll have to be carted away from the game.

That reminds me more of people in my Dad's generation rather than mine. That mindset being retirement is out of the question, it's like a death. I sense that in this quarterback and instead of me putting on my cheesehead and calling Favre a traitor or wishy washy, I'd rather look and smile at my own grays, and give my respect to someone who still believes in hard work to the end.

So I think it's wonderful that he's playing. I hope he plays another five years. I won't be pulling for him two games this year though. I'll get to actually cheer when he throws his first interception to a Green Bay Packer. But if by some strange alignment of the stars the Vikings make the Super Bowl, I'll be pulling for the team in the ugly purple shirts.
at August 31, 2009