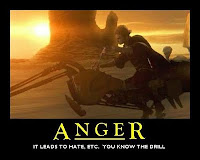 I wanted to touch on another topic in my customer service series. Time time I'm directing my attention to companies.

Recently a company and major partner changed their phone menus to a complete voice activated system. Many of you have experienced these new phone prompts that do not involve pushing a button for an option, but forces you to speak your option. Those spoken options teach the phone menu the direction for your call and on paper are supposed to get you to the right place.

I understand the need for this process. Especially in companies that have a department for everything, nothing can be more frustrating than sitting on hold for a long time just to end up in the wrong department. It's just not so easy to hit a button and be in the right place, I understand the need to specify departments, just so that's known.

Companies are convinced this is something that will benefit customers and it's something that customers want. I don't know where they're getting this information. I've been vocal (pardon the pun) about these voice systems. I can't stand them. I even will polish off the word hate, and I really try not to hate anything, to voice (again with the puns) my poor opinion on these systems.

I went out to Twitter to poll my friends asking if they liked or disliked phone systems. I got a universal and expected response. My surprise came at the strong dislike for voice prompts that came back from this informal and non scientific survey:

So there's an understanding from some about the need for phone menus, but a very strong dislike for having to deal with them on a needed basis. So what are my thoughts? I have a few and companies need to hear these thoughts because I am very obviously echoed by many.

I do not like to use voice prompts at all. I much prefer to be able to push buttons not because I'm used to such a system, but because it does not involve talking to an inanimate object. I'm not talking verbally to a person, I'm speaking to a recording. I feel very much uncomfortable speaking out loud basically to myself.

So not only do I feel uneasy about speaking to the air, but I'm quickly annoyed by repeating myself. It happens on every call and my patience for repeating myself is already very low. It's almost intolerable to repeat myself to a dumb recording. I, like many begin to curse and speak gibberish on purpose just to finally hear the recording pass me on to a live person.

So let this be my plea and let it be heard by companies that use this stupid menu system or companies that are thinking about implementing one. Stop. Now.

I will go elsewhere. I promise. I have a feeling I'm not alone too.