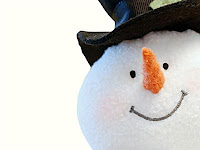 A quick look at the satellite tells me that we are due for nearly a foot of snow in the Richmond area this weekend. Guess it's time to prepare for the end of things.

The South is unique when it comes to preparation for this cataclysmic event. My Northern readers have all been slowed down by snow, but never completely shut down by the white stuff. In fact, most are lucky to miss a morning's activities with rarely a cancellation of school, work, church, or other social events. These Northern readers also find how we deal with the four letter S word to be completely humorous.

At the first mention of snow, people begin to stock up with milk and bread in fear of this apocalyptic frozen precipitation. Why milk and bread? I've always wondered that. I can understand the need for bread, but if one loses power for a week, water may last longer in that refrigerator. The dairy industry thanks you, I guess.

Many buy (I prefer the word waste) at least a week's worth of extra supplies in case they are trapped for days, much like the preparation one would take before being struck by a nuclear attack. I find that funny especially when during the height of the storm and cleanup, those same people are found outside, wandering these so called undriveable streets looking for a place to eat.

It really should be said that we should all have emergency supplies for any event, not just a blanket of snow. I'm sad to even say that would even have to be said, but it does.

Oh, Virginia, the four letter S word has you in it's grip. I would think as I check this forecast it's pretty safe to close schools on Monday too. Maybe to be safe we should also just close them on Tuesday as well. There's no way 48 hours is enough time to clear the roads, it will be too slick from all the people that were out wandering around on the roads looking for something to eat despite being stocked up for an entire season of bad weather for this one small weather event.

May my days be long on this earth to continue to mock this sad sad behavior because it merits it. Yes, it merits it. My tune only changes when it snows like this during the week!
at January 29, 2010