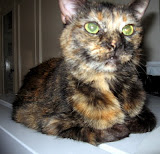 I ask the oldest, and wisest of the house cats every year which team will prevail in the Super Bowl. Topaz, despite said age and wisdom has gotten the prediction wrong every year. OK, it's really me that's gotten it wrong every year. But true to form I asked her again to take the fall for me.

When asking which team would win this year she meowed for the Saints. Granted, she probably just wanted more milk, but I'll call that her prediction. Sorry, Saints fans, looks like the Colts will be winning another Super Bowl this year. Either way, I'm hoping for a fun game. We'll be hanging out at Kelly and Jeff's (mostly to see their new digs).

Be safe out there, cops will be everywhere, so no drinkey drivey!