I don't really have a mailbag, but I've made it very easy for people that want to ask me questions to do so. My email is located on top of my blog. I even have a voice mail tab over on the right sidebar. That goes to my Google Voice mail which is connected directly to me. You'll see how below.

From Twitter, @snerk asks: @mlewis106 I have an android phone coming either tomorrow or thurs. what apps do you recommend? (by the way, follow snerk on Twitter) 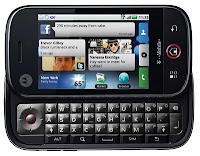 First of all, congrats on getting an Android phone and joining this now massive hoard of people that like having an open platform for their phone and a great community of enthusiasts online. (I also asked, he's getting a CLIQ, I've pictured it.)

That's a very nice phone! The CLIQ is made for 'social network' minded people. The integration with  Motorola's BLUR platform is very neat and I'm jealous that I don't have it on my phone. Be that as it may, to best answer this question is for me to list a few apps that are worth the price, or even better, are free.


I've already sort of mentioned the Google Voice app above. Google Voice gives a user a phone number. When one gives that number to friends or family and they call, it's then forwarded as needed. So when my Mom, Dad or Janine calls, everything rings, when Unavailable calls, it goes straight to voice mail.

Voice allows me to see my messages via transcription if I do miss a call. Now their transcription isn't the best in the world, they mess up a lot of words, but I get the gist of the message and it saves me from always having to call my voice mail to hear my messages.


What makes it a winner on my phone is that it completely takes over having to use T Mobile's voice mail and allows me to carry over anything done on Voice to my desktop. I also don't have a texting plan, but with Google Voice, I can send SMS's like all the cool kids do! So that is my first and above all must app for Android if you are willing to tell everyone that new number.

Along with Google Voice, I recommend checking out the rest of Google's own developed applications. I use Google Listen for podcasts, Google Shopping, Translation, Goggles, and Sky Map. They don't have an app for Tasks yet, but I use gTasks which syncs up with my Tasks list on my desktop and that works to remind me to run certain errands or makes shopping lists. These all complement well with the stock application such as Gmail, Maps, and Calender.


If you've gotten this far you're probably thinking, gosh he loves Google. Eh, I just like having everything that we do in the cloud in one place. It does me no good to have this stuff all over the internet, it's exhausting enough as it is. With the question at hand though, I'd have to know specifically what personal likes and dislikes are. My Android phone keeps all of this together for me in ways that I'm still trying to grasp.


I don't have many paid apps, but there are a couple of value that I decided to invest in. The three that I have and enjoy more than anything are Beautiful Widgets, Pure Calender, and Twidroid Pro. All three of these are or use widgets on my phone which puts this platform on a huge advantage of the very plain, sleepy design of the iPhone. The CLIQ runs a lot of great stock widgets too. So the key is to find out what's missing, and I think these paid applications fill that void.

Pure Calender syncs up with Google Calender and allows me to dedicate some screen real estate to show me my calender daily. Beautiful Widgets gives me a fully customizable clock, weather forecast, and access to a few other toggle widgets for my phone. Twidroid Pro is my preferred Twitter client. It has more functionality on it than any other Android Twitter app that I'm yet to run across. There are several nice alternatives out there, but this one has been the best so far.

There are a few games that are worthwhile, but most game developing has been swallowed up by the iPhone. I do enjoy Robo Defense, Bonsai Blast, and Frozen Bubble. Honestly though, after a few minutes playing Android games, you're going to want to install any Linux distro on your desktop at home and play their stock games. In time, developers will come around, but for right now, I'm yet to find anything worth playing.

For music, the stock music application is dull but practical. Being huge fans of Last FM and Pandora, I prefer using their apps to bring me music rather than filling my SD card with songs. Stream Furious is a great way to stream local channels, and Iheartradio is handy as well for those that still find room in their hearts to listen to over the air radio still, there are times....occasionally.


Of course just about all of the location based apps are on Android. Foursquare, Brightkite, and now Gowalla has an application (in beta). They're more basic than their iPhone sisters, but they work just as well and have good functionality. I never thought I'd be mayor of anything until I tried those apps. Now I'm the mayor of my local Lowe's, Mall, and Target!


I can post and post and post and post about great Android apps, but it's up to the user to determine how he wants to interact with his or her smart phone. If you're using Android, feel free to tell me what apps I forgot in the comments. I know I've forgotten several!
at March 02, 2010