I meant to give a recap of our vacation last week, but after posting some pictures, I completely forgot. On top of that, all the pictures I took with my phone were lost when I reformatted my SD card before moving the pics to my hard drive. So I've felt a giant dunce hat over my head all week. Lucky for me Janine takes great pictures and I have all of those safe and sound.

Janine and I have made it a point especially after last year to take the train every year for our anniversary and find a spot on the map that we haven't visited and visit it. Last year we had a lot of fun in Philadelphia and I took the occasion to propose to the most wonderful woman I've ever met. This year, per her suggestion, we looked into travelling south.

The easy choice would have been somewhere like Charlotte or Atlanta, but I figured Charleston would have more of what we were looking for. Charleston has great beaches, a colorful history, and an interesting locale. So we decided to test our train legs and take the 7+ hour train ride each way to South Carolina. Our first lesson, that ride is just as long as it sounds...if not longer! Carry a lot of reading material and be ready to sit for a long, long time.

Each way the train was delayed, which we can live with, but 4 hours of our vacation were spent waiting for a train. Something else we learned, CSX owns the tracks south of DC, so Amtrak operates on their rules. Both ways we were under a heat advisory which kept the train on a slow pace back and forth to our destinations. So keep in mind before taking long train trips in the south that the trip can become longer than planned.

Once in Charleston after such a long ride, and trip to the airport to pick up our car, we did what any red blooded Americans would do when looking for food at 11 at night, we went to Dennys! After a late breakfast, we headed to the Isle of Palms to check in to our hotel room. I lucked out and found a great deal on Hotwire for something on the beach and we could not have been happier with our stay. The name of the resort is Wild Dunes and even though it is primarily a golfing and tennis resort, it had the necessities that we needed, a place to rest, and access to the city.

Something I learned when doing this kind of travel, especially if staying in a resort and renting a car is to own a credit card. Traveling on debit can be painful as they can hold several hundred dollars to ensure there are no additional charges incurred. So I think keeping a very small credit card for travel (and online purchasing) is a good idea, just keep a 0 balance on it! I've never been and advocate for keeping a credit card, but there are times it does help to have something for these occasions.

Our first day in Charleston, we took a trip to historic downtown and walked around the Battery area. This was the area that received a great amount of shelling from Union ships during the Civil War. Many of the houses that still stand from the war still bear those wounds even to this day. It did not take long to see why so many patriots from the Revolution came from this area too, Charleston was a center for merchandising in many good and bad trades.

We got some good rest and relaxation in both days. It was so nice and recharging to be on the beach and have access to the ocean. My only wish would have been to have another day to lay out and catch some more rays. 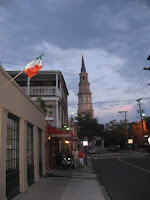 The second day was highlighted by our trip downtown to take a Haunted Graveyard tour around Charleston. The trip starts in their French quarter and it was great to see such a living, breathing, fun downtown with people taking in and enjoying the Spoleto which was going on while we were there. I'm linking to the festival so people can take a look and maybe plan on visiting next year too, I recommend it for anyone who appreciate the arts.

All in all we had a lot of fun. Charleston is a very humid and warm town, easy to navigate, home of a lot of nice Southern people, and a lot of fun. We may go back someday soon, probably not by train though.
at June 10, 2010