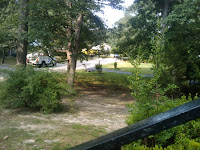 I posted this picture earlier on my Posterous account. I wanted to share with with my blog too for posterity. So here's my day in review:

I woke up as usual, ten minutes later than I had to be up, completely dragging arse. I felt kind of weird though. I felt dizzy. I figured maybe I slept wrong but I didn't have that tell tale sign that I slept wrong. Sometimes I'll wake up with my head at a 90 degree angle from my neck and wake up with a terrible crick in my neck, but I felt fine.

So I went into work but now on top of the dizziness I felt completely nauseated. I figured if I ate maybe this will all go away, but it only felt worse because now I felt as though I had given my stomach ammunition and reason for ejection. I decided to call it a day after lunch.

I go home to lay down. Not twenty minutes after I put my head down I hear a succession of loud popping sounds. I thought for some some idiot wanted my foot shoved in unmentionable places or maybe it was a one time gag. Ten minutes later another succession of loud pops convinced me to get up and go see what was going on.

After going outside and walking around the building, which was by instinct only, I saw the culprit. Two of our power lines that connect us to the grid were intertwined and exposed. The result was a popping sound every time the air conditioner would cut on. I figured this was not a good thing and called the power company. I'm not sure what happened, there were no downed limbs, but there were some suspicious crows close by.

Dominion was quick to come out and the service call was easier than expected. I think that deserves mentioning. I'm used to dealing with crappy utility companies, but I was really happy. At any rate, they came immediately, saw my power lines and told me to kill my main. After alerting him that I had done so I went back outside.

The tech already had yanked the power cords with prejudice and told me that I needed new wires. Come to find out the wiring to our house was as old as our house and they were just waiting to bust and cause a potentially big mess. So out of all this I got new wires after a two hour dizzying experience in the heat of our darkened house.

I could have come home today at five to a power outage or much worse. I hate to even mention what could have happened, but I instantly thought how strange it was to call out of work for maybe the third time in as many years. My morning sickness could have helped prevent one of the biggest disasters in our lives. I'm not giving myself credit for being ill, but it's always 'funny' how things always work out.
at July 13, 2010