This month started with great news about my phone (MyTouch 3G) getting it's stock upgrade finally to Froyo. So I've spent for the first time in 13 months time on my phone in stock 1.6 instead of a 2.x ROM. The downgrade can be excruciating, but here's what has kept me sane these past few days:


TweetDeck for Android on AppBrain

Tweetdeck for Android has come out of beta and is suprisingly available for me in my downgraded state. I've often used the desktop version of Tweetdeck, so moving to the phone app was simple. All I had to do really was sign into my Tweetdeck and viola, my columns carried from the desktop and all of my accounts. Unlike most Twitter apps, I can post and read my Facebook, Foursquare, and Google Buzz accounts all within the same application. There's enough good customization to start, with room for improvements over time, but this is highly recommended and only rivals Twidroyd for the most use on my phone.

SSI gTasks syncs up my Google Tasks from my desktop to my phone. There really isn't much else to this application, but it's served as a lifesaver on many occasions because I use Tasks as my grocery list. So I make a list either on my phone or at my desk and everything syncs up instantly. There are some great grocery applications on the market, but I really just like having a simple list, check an item off, and I'm done.

When the Photoshop application came out at first on Android, I was thrilled then disgusted. The original application paled so badly in comparison so the iPhone app, which is brilliant, that I immediately uninstalled it. Now the application has a few more effects and has a nicer interface, so it's back on my phone. I'm far from an expert on using photo editing software, but this helps me when I take a quick picture for my photo blog. 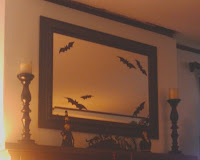 The picture shown is one that I took and edited with the app. It's not my best work, but I wanted to quickly crop out the lamp which was blinding the shot and give it a spooky, warm effect. And I wanted to show off Janine's awesome mantle.

I look forward to my phone receiving the stock upgrade, I plan on sharing my joy when the upgrade does finally come and I'll share next time some great 2.2 applications!
at October 17, 2010