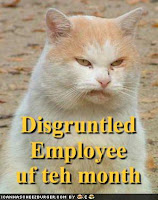 I really tried to post something last night. I had nothing. It's not that there's nothing going on, it's just all work related. I prefer not to post about my work here. Nothing bad happening, we are making a lot of major upgrades which involve my expertise over the next couple weeks. We're getting new hardware, new software, a lot of shiny new-ness.

Other than that, there really isn't anything going on, just your typical January slowdown after the holidays. I'm thinking I'll be singing three tunes over the next several months, work, gym, and home. So I don't expect much personally, over the next few days and weeks.

I think I'll stick to posting on new gadgets and apps especially in light of this week's Consumer Electronics Show in Las Vegas. Looks like I'll have a very nice birthday this year!
at January 07, 2011