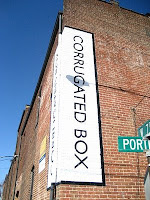 This is a big time feel good story for me.

I've always felt envious about the Silicon Valley and New York City where a vast majority of tech companies call home. I never thought that Richmond would be home to anything remotely close to new tech, social networking, etc.

Tumblr has announced that they are going to open a second office here in Richmond. Tumblr is a great micro blogging platform which has great social features. I have a couple pages, but mostly I've used it for feeding information. That may change now that there's a possibility that I can now support a local company.

I think this is exciting news! I hope more companies see the rapid growth of the social space in central Virginia, the lower taxes (compared to NY and CA), and an active community ready to embrace this new media. I think I'm going to have to re think how I use my own Tumblr account now. If you're on there, let me know who you are.

Here's a shot of the inside of the Corrugated Box building in the Manchester district where Tumblr has set up shop. I can hear Janine now. She loves that area, she has family that lived there, and we'll probably find a house in that area one day. Don't tell her I like that area too, it's so close to everything cool in Richmond. I hope that area continues to clean up and innovate.