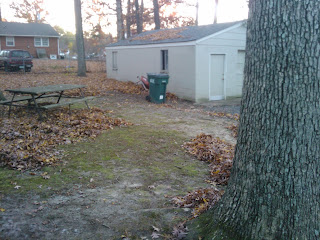 I know I've posted this picture before. Probably when talking about my forever saga moving leaves every fall. There's something in this picture though that is missing now.

Want to take any guesses?

I woke up this morning, got up and headed out. While backing up, I looked over my shoulder to see where the trash bin was located. I put it on the street for pick up the other night.

It wasn't freaking there!

Some ghetto, redneck, knuckle dragging, slacker dipstick targeted my dumpster. It's possible it was lifted because it had less garbage in it then the rest of the cans on my street. My first thought was maybe the county claimed it for a late bill or my can was getting replaced, but it's a pretty new can. So I called and ordered a replacement, but what a stitch.

Here's my tweet which will will assuredly afflict these thieves with various skin and body disorders. I will have justice! Bahhahaha!

To the redneck who stole our trash bin this morning, may your days be long & full of suffering, worms, rashes, boils, baldness, and ED. Ass.less than a minute ago via web