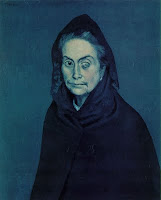 Last night, Janine and I took advantage of a rare chance to catch some prolific artwork. The Picasso exhibit came to Richmond earlier this year and this weekend it is concluding to sold out crowds. I'm glad we went. Picasso's art is thought provoking, it makes statements towards the time the works were done, and we get to see his perspective on humanity and the world.

We in fact were so thrilled with the work that the Va Museum of Fine Arts is bringing to Richmond, that we became members. Between this exhibit, the Tiffany exhibit last year, and Faberge coming up later on this year, it made sense to become a part of this, and we think it's important to support local venues that work hard to bring the world to our town. There's a lot of change and growth in the city and I'm becoming more and more proud to call Richmond home.

It was announced this morning that there will be a cultural exchange with China. Two hundred items from the Beijing Palace will be sent here to Richmond in 2014. We will in turn send art to the Chinese Palace Museum, one of the largest museums in the world. That's a pretty big deal. It's okay to be excited.