I Have Been Unrolling 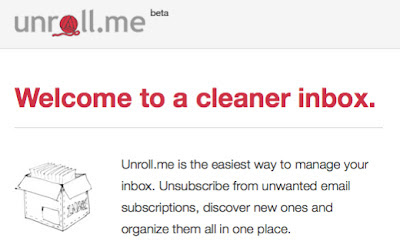 I am an inbox zero fanatic. Maybe not specifically with Merlin Mann's methods, but with the concept of not having emails cluttering my inbox. I'm probably so fanatical about not having anything in my GMail account, psychologists would probably find reasons to worry. It's really just OCD though, I swear. I just see it as one thing in life where I can have God like control. Lately, however, it has become more difficult to stay on top of emails.

There's Groupon, social network notifications, Living Social Deals, and now Amazon local deals on top of Google Offers, sales reminders, and so on. I'm up to my eyes in deals that I never use. If I need a deal, I know where to go and find them. Not only that, services that I signed up for years ago are now deciding to send me newsletters. I started to feel like I was losing my God like controls. I'm not feeling my inner Zeus.

Unroll.me is an interesting service that helps users unsubscribe from those types of emails. You know, the six sales reminders for the furniture store or the updates to a webpage you haven't even thought of visiting in quite some time. Instead of hitting delete, or creating a filter in GMail (which is what I used to do), now I just let someone else do my dirty work.

The unroll me service sends a daily roll up or list of emails from the previous day. From there, I can go into settings and allow those emails to continue or allow unroll me to unsubscribe from them. It does involve giving them, to some degree, the keys to the castle. I needed the help though, and they have been above reproach with a good reputation preceding them. I also found it funny that a service that prides itself on cleaning out your email sends you a daily email. I do think I can live with this one every day for the foreseeable future.

I looked at other reviews (here's a Lifehacker one) and they do mention sending out tweets about using the bulk service, but after a month I'm yet to be prompted to do anything of the sort. What it has done is removed 30 pesky, regular newsletters and other often tossed emails out of my inbox. For the brave out there, I would recommend this, especially if your inbox has pages and pages of emails from stores that will just sit there for infinity.