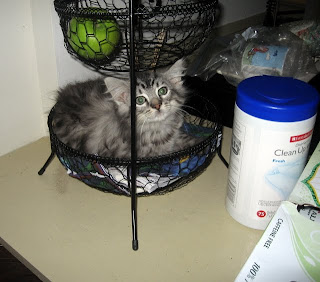 The last thing I wanted to do on my journey of posting every day in February was talk about my cats. I do not want to appear to be that guy, but since we happen to have so many, from time to time, we have to deal with them, and take care of them. Today, our outdoor cat paid a visit to our new veterinarian.

We picked up Dexter three years ago from Janine's co worker  He was a stray cat at the mall and we eventually taking care of him. He was too young for solid food still, so we would bottle feed him at all hours. Being mostly feral and not human friendly, he took to the outdoor life as soon as he could. Having a cat door was his great escape into our back yard.

He's always been a distant cat, but when he wanted affection, he would aggressively seek it out with me. I probably spoiled the cat by holding it as a baby for hours or letting him sleep on my neck until he was too big to do so. It's funny though, at dinnertime, Janine is his best friend. At any rate, he's a fine cat and more importantly a great hunter of moles, mice, and other vermin that plague our suburban neighborhood.

We noticed a fairly large bump on his head last week. Being the persistent optimist, I had assumed he knocked his head against a tree branch. I've seen this cat at a full run and it's a wonder he cannot bend time and space. Being part lynx/wildcat, he has very long strong legs and he knows how to use them. I figured it could also be some kind of abscess, which I've heard can happen on a long haired cat.

He showed signs of great lethargy yesterday, so we decided we should no longer wait to take him into the vet. Sure enough it is an abscess and I will spare the details, but it's being taken care of today at no small cost.

He will be fine and back to his old mean ways soon enough. It is amazing how much we spend on these animals, but when they become a part of our life, one can only pay up and hope he stays around long enough to bring a return of investment.

Taking him home was a bit of an adventure. He has a drainage tube for the infection (I will not go into further graphic detail) and he has to wear one of those e collars. He does not appreciate the e collar. It's rather large on him, but he will not walk and is refusing to do everything. They say in time he will learn to accept the collar, but being an outdoor free cat, he does not see this as anything but total oppression.

In 5 days, he will be back to normal and that day will not come soon enough.