The Problem (Really) in Modern Discourse 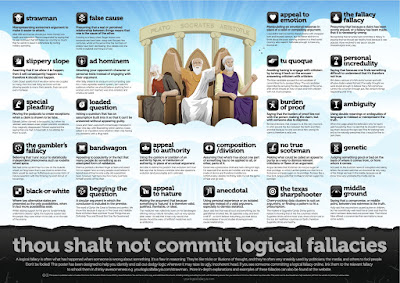 I always walk this fence where I don't like how politics has injected itself into all of our conversations, but I still occasionally enjoy having them. I think by and large, we all have sensible conversations, but thanks to the internet and social media, we've kind of let the old rules slip away.

I get aggravated by people that I agree with and with people I disagree with online because there's been a huge lack of intellectual honesty the past few years. Someone will find great offense to something one politician does while letting a favored pol pull the same stunt. We've lacked a lot of consistency and this lack of intellectual honesty turns a lot of people off leading them to silence their friends by muting or unfriending them.

The next huge hurdle we face now is that no one really knows about fallacies and basic debate devices that used to lead to productive conversations have been replaced by screaming and mob mentality. A good example is reacting to en errant politician by pointing to another politician that got away with the same mistake. 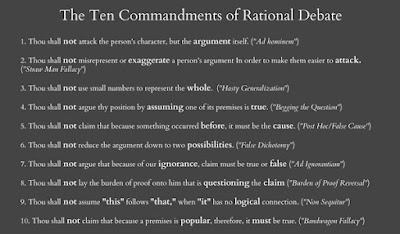 So all we're left with are non sequitur, straw men, bandwagons, and it's all loud, messy, and I am convinced it's on purpose. People are mostly left to just turn it off and run away, not debating, but surrendering to the noise. It's a shame that these tactics are used because in this day and age. There's a lot of conversations that really need to be both started and completed.

My take away: Learn the fallacies and avoid them. I know there's a lot of them, but if people don't know they're riddled with fallacies, it's going to be hard to be taken seriously. So more important than my blabbing, read them   ---->  HERE